Painting by Werner Horvath.
A kouros is the modern term given to those representations of male youths which first appear in the Archaic period in Greece. Kouroi are beardless, take a formulaic advancing posture, and are most often nude. At the same time when kouros-statues were created, pre-Socratic philosophy appeared in ancient Greece. Therefore in the painting you find a deawing in the sand, illustrating a theory of Thales of Miletus, one of the main representatives of this philosophical school: the Thales’ Theorem.

Posted by Austrianart | Filed under art 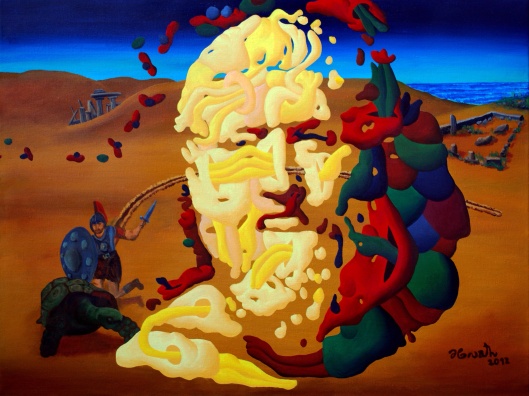 Portrait of the pre-Socratic philosopher including Zeno’s paradoxes like “Achill and the Turtle” and his “Arguments aginst Motion”.

Posted by Austrianart | Filed under art